Tuesday is for Thinking 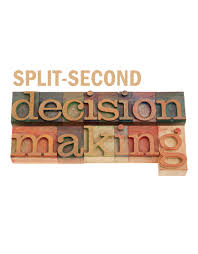 I had my first crash of the year on my bike today (actually, last Friday). It happened on my way to an appointment at a breakfast restaurant. I was enjoying the speed of the trip. Unfortunately, I enjoyed the speed right into the parking lot where a split second decision put me in the path of a car.

The only way to avoid crashing was to lay the bike down. My right elbow dug into my ribs and compressed and severely bruised, but did not crack the ribs. The fall, combined with dehydration, and the huge adrenalin pump rushed into my body by the eminent crash and fall caused a cascade of short term “health issues.”

Why all this personal “health talk?”

All these results, the continuing pain, the sleepless nights because I can’t lay on my side, the grimaces when I cough, the searing pain when I lean on my side the wrong way, all came as the result of a decision that took less than a second. A split-second decision to turn and go down one row of cars as opposed to another caused all of it. One bad decision. That’s all it took.

How often in life are our days and nights made more complicated and painful because we choose the wrong path, the wrong decision morally, in a ‘split-second’ decision?

More often than we care to admit or consider, I suspect.

May your heart hunger for his “precious and great promises” so that you too can be better prepared to make all the split-second decisions of life.

Where are the Shepherds?

Are You a Gentile?