Last week someone visited my blog from a website called PrayThroughHistory.com. The tag line underneath the title really caught my attention, “Heal the Past. Free the Present. Bless the Future.”

I love what they are doing at this site. The idea seems to be to look at a historical event, personage, issue, or disaster and use it as a basis to learn, confess, ask forgiveness, or praise God for His care.

Heal the past. Free the present. Bless the future.

Great idea for all of us. Below is the last post (in its entirety) along with a link to the site. 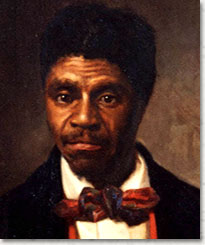 Dred and Harriet Scott, slaves who lived at Fort Snelling in the 1830s, claim they became free in Minnesota, where slavery was illegal. The U.S. Supreme Court rules that, because they returned to Missouri where slavery is legal, they are still the property of their owners.

In 1836, the African American slave Dred Scott was brought to Fort Snelling by his owner, Dr. John Emerson. While at the fort, Scott married another slave, Harriet. Later, Emerson moved to St. Louis, taking his slaves, the Scotts, with him. In 1846, Dred Scott sued for his freedom. He claimed that, since he had been taken to live at Fort Snelling–at the time part of Wisconsin Territory, where slavery was prohibited–he was a free man.

In March 1857, after 11 years of trials and appeals, the U.S. Supreme Court declares that because Scott isn’t a citizen of Missouri (a slave isn’t allowed to be a citizen), he’s not entitled to sue in its courts; and that slaves are property and that no law can deprive a person–that is, a white slaveowner–of his rights to life, liberty, and property.*

Christ have mercy! We often want privileges under the law for ourselves, and not for others. This is not Your example. “In the beginning was the Word, and the Word was with God, and the Word was God. He was with God in the beginning.” John 1:1,2 Jesus, You submitted to the limitations of this world. You went from the total freedom of heaven to living in Satan’s jurisdiction. You know what it’s like to have Your rights curtailed! Thank You that You are able to relate to everyone who has endured under slavery, and that You never knelt to hatred of authority.

Firstly, bless Dred and Harriet Scott, their generations, and their dwellings in Jesus’ name! Thanks for giving him the boldness to challenge the system. Forgive our system for allowing human beings to ever be classified as ‘property’! May we inherit a heart to challenge falsehoods and misbeliefs of our state.

Secondly, forgive Missouri and the U. S. Supreme Court this offense against You, and the inalienable rights You’ve freely given to all people, everywhere, at all times. You made all men in your image! You’ve made all women in Your image! Is not an affront to one an attempt at mutiny? You are our God, and we are Your people!

Third, forgive the judgment made against the Scotts’, and counter judgments made towards Minnesota, Missouri, or the U.S. in general. Will You release us from our heritage of bitter judgments and curses into the way of forgiveness and blessing?

*Note – PrayThroughHistory uses the timeline located for several years at the Minnesota Historical Society Web site, at this URL: mnhs.org/about/dipity_timeline.htm

3 thoughts on “Dred Scott and the Need for Continuing Prayer”

Winter Strategies to Engage with Neighbors

When We Deserve the Worst

Guest Post: Bill Bauer on Learning How to Think