Thursday is for Ending Abortion 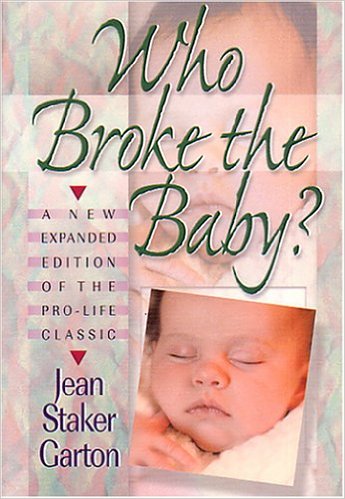 The book was written and released six years after the 1973 Roe vs Wade decision.  It was one of the first books I read on the issue of abortion and it helped to shape my growing passion for the unborn.

And it opens with a haunting story.

Jean Garton was a resident of Pennsauken, New Jersey and the mother of four children. Her fourth child’s third year was the first year of the Abortion era.

All our children were in bed; the late television news was over, and I was putting the finishing touches to a presentation for medical students scheduled to be given the next day. As I reviewed some slides which might be used, there appeared on the screen a picture of an abortion victim, aged two and one-half months’ gestation [10 weeks]; her body had been dismembered by a curette, the long-handled knife use in a D & C abortion procedure.

Suddenly I heard, rather than saw, another person near me. At the sound of a sharp intake of breath, I turned to find that my youngest son, then a sleepy, rumpled three-year-old, had unexpectedly and silently entered the room. His small voice was filled with great sadness as he asked, ‘Who broke the baby?’

How could this small, innocent child see what so many adults cannot see? How could he know instinctively that this which many people carelessly dismiss as tissue or a blob was one in being with him, was like him? In the words of his question he gave humanity to what adults call ‘fetal matter’; in the tone of his question he mourned what we exalt as a sign of liberation and freedom. With a wisdom that often escapes the learned, he asked in the presence of the evidence before his eyes, ‘Who broke the baby?'”

Pray about that. Ask God how you can serve Him in the fight against abortion.

And if I could recommend one book on how to begin to become informed about the fight to change the heart of the nation end abortion, it would be this one, Who Broke the Baby?  It is not long. Dr. Garton is an excellent writer and it is very readable. And you can get it at Amazon right now for a penny plus $3.99 postage.