If you didn’t get your Olympic fill with the nearly 24 hour broadcast, maybe this will help. My source is Wikipedia. Eric Liddell’s Olympic exploits were depicted in the Academy Award winning movie Chariots of Fire (1981). After the 1924 Olympics, Liddell went to China as a missionary and served there until captured by the Japanese in World War II.

In his last letter to his wife, written on the day he died, (Eric) Liddell wrote of suffering a nervous breakdown due to overwork, but in actuality he was suffering from an inoperable brain tumour; overwork and malnourishment may have hastened his death. He died on 21 February 1945, five months before liberation. He was greatly mourned not only at the Weihsien Internment Camp but also in Scotland. Langdon Gilkey was later to write, “The entire camp, especially its youth, was stunned for days, so great was the vacuum that Eric’s death had left.” According to a fellow missionary, Liddell’s last words were, “It’s complete surrender”, in reference to how he had given his life to his God.[12] 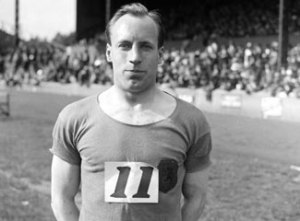 Before the Beijing Olympics, as a show of respect and to garner Western sympathy, the Chinese revealed a previously unknown bit of information about Liddell.

In 2008 Chinese authorities revealed that Liddell had refused an opportunity to leave the camp and instead gave his place to a pregnant woman. Apparently, the Japanese made a deal with the British, with Churchill’s approval, for prisoner exchange.[2] This information was released near the time of the 2008 Beijing Olympics by the Chinese government and apparently news of this act of sacrifice came as a surprise even to his family members.

Fifty-six years after the 1924 Paris Olympics, Scotsman Allan Wells won the 100 metre sprint at the 1980 Moscow Olympics. When asked after the victory if he had run the race for Harold Abrahams, the last 100 metre Olympic winner from Britain (in 1924) who had died two years previous, Wells replied, “No, … I would prefer to dedicate this to Eric Liddell”[13]

Such is the impact of a life lived in surrender to the God of all comfort. Generations yet unborn sing the praises of those who have gone before and who leave a legacy of faithfulness and joy. May God turn many of this generation’s Olympians into mighty voices for the Savior.

All the Purposes of God are Centered in Christ

Why Your Neighbor Needs You to Sing

18 Verses, 1 Request: The Saddest Song in the Psalter