[Listen to the sound file while you read — two inches to the right of this line on this page, marked “Aubre’s Gift”] 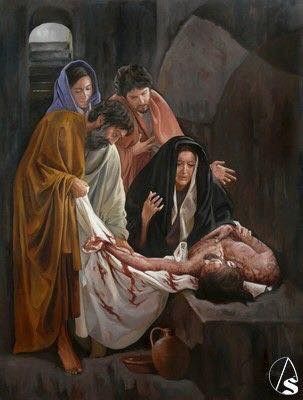 The Savior’s Body is Taken Down and Entombed.

Jesus is Sealed in the Tomb.

When it was evening on the Day of Preparation, that is, the day before the Sabbath, there came a rich man from Arimathea named Joseph, a respected member of the Council, a good and righteous man, who also was a disciple of Jesus. He had not consented to their decision and action and was looking for the kingdom of God. Though he feared the Jews, he took courage and went to Pilate and asked for the body of Jesus secretly.

Pilate was surprised to hear that He had already died. Summoning the centurion, he asked him whether Jesus was already dead. And when he learned from the centurion that He was, he granted the corpse to Joseph.

Nicodemus also, who earlier had come to Jesus by night, came bringing a mixture of myrrh and aloes, about seventy-five pounds in weight. So they took the body of Jesus and bound it in linen cloths with the spices, as is the burial custom of the Jews. Then they laid the body in Joseph’s own new tomb, which he had cut in the rock.

No one had ever yet been laid in the tomb. And they rolled a great stone to the entrance and went away.

Mary Magdalene and the other Mary were there, sitting opposite the tomb, and saw where and how the body was laid.

So they returned and prepared spices and ointments. On the Sabbath they rested according to the commandment. The next day, that is, after the Day of Preparation, the chief priests and the Pharisees gathered before Pilate and said,

“Sir, we remember how that impostor said, while he was still alive, ‘After three days I will rise.’ “Therefore order the tomb to be made secure until the third day, lest his disciples go and steal him away and tell the people, ‘He has risen from the dead,’ and the last fraud will be worse than the first.”

Pilate said to them,

“You have a guard of soldiers. Go, make it as secure as you can.”

So they went and made the tomb secure by sealing the stone and setting a guard.

It was the last night before everything changed. But no one knew what was about to happen.

Every picture, every painting of Christ being taken down from the cross is designed to convey a deep sadness and loss, layers of sorrow that words somehow seem inadequate to fully express. So the artists try to use paint and canvas rather than words and parchment, and still they fall short of the heartbreaking reality of the Lamb of God’s death.

Limp and lifeless, He is taken down. He is laid in a tomb, in fulfillment of Scripture—the tomb of a rich man. Isaiah prophesied it some 750 years before with these words: (ISAIAH 53:9)

HIS GRAVE WAS ASSIGNED WITH WICKED MEN,
YET HE WAS WITH A RICH MAN IN HIS DEATH,
BECAUSE HE HAD DONE NO VIOLENCE,
NOR WAS THERE ANY DECEIT IN HIS MOUTH.

Of course He had done no violence. Of course there was no deceit in His mouth. He was the spotless, sinless Passover Lamb. He was the One to whom John the Baptist pointed and declared:

“Behold the Lamb of God, Who takes away the sins of the world.”

But we have sinned.

We have lost our tempers. We have called people fools. We have lied. We have stolen. We have used the Lord’s name in vain. We have dishonored our parents. We have broken every one of the Ten Commandments in our hearts and most of them with our mouth or hands. In other words, we are—all of us—lying, thieving, dishonoring, and blaspheming sinners standing guilty before a holy God. Violence and deceit have been with us all our lives . . .  but not in Him.

He was perfect. And now He is laid in a tomb. The last night has passed. It is Good Friday afternoon and the whole world is shrouded in darkness.

“Spotless Lamb of God,  You lay dead in Joseph’s tomb,  so that I could walk in newness of life. Without Your death, I would have no hope. Because You died,  I  have heaven. Thank You for the cross.  Help me to understand the significance of the cross and to lift it high so that others  would be drawn to You  and the mercy that You give.  For the glory of God, I pray this.  Amen.”

One thought on “A Midnight Devotion Before the World Changes”

Have You Been Humbled into Gladness?

What Does it Mean to be Born Again?

Paint Me a Picture (God in a fence)