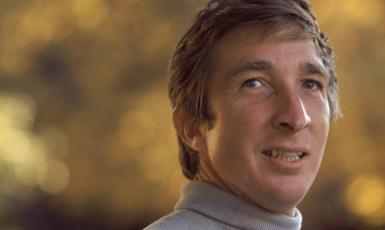 “And while the book is remarkable in its entirety — take a closer look with Kathryn Schulz’s exquisite review for New York Magazine — one of Holt’s most fascinating conversations is with someone one wouldn’t immediately peg as an expert on cosmogony: novelist John Updike, who seems to share in Isaac Asimov’s famous contention that “the most beautiful experience we can have is the mysterious.”

[T]he laws amount to a funny way of saying, ‘Nothing equals something,’” Updike said, bursting into laughter. “QED! One opinion I’ve encountered is that, since getting from nothing to something involves time, and time didn’t exist before there was something, the whole question is a meaningless one that we should stop asking ourselves. It’s beyond our intellectual limits as a species. Put yourself into the position of a dog. A dog is responsive, shows intuition, looks at us with eyes behind which there is intelligence of a sort, and yet a dog must not understand most of the things it sees people doing. It must have no idea how they invented, say, the internal-combustion engine. So maybe what we need to do is imagine that we’re dogs and that there are realms that go beyond our understanding.

I’m not sure I buy that view, but it is a way of saying that the mystery of being is a permanent mystery, at least given the present state of the human brain. I have trouble even believing—and this will offend you—the standard scientific explanation of how the universe rapidly grew from nearly nothing. Just think of it. The notion that this planet and all the stars we see, and many thousands of times more than those we see — that all this was once bounded in a point with the size of, what, a period or a grape? How, I ask myself, could that possibly be? And, that said, I sort of move on.

Making room for mystery in one’s worldview is a great need in all spheres of life, science, not the least of them.

One thought on “John Updike Observation on Science and Mystery”