Here is a great piece of history rescued from the ashes of World War II of a day when the church stood for righteousness in the face of fascist evil. Read it and rejoice in the wonder of what God can do when believers stand on the faith they profess against all odds. The following comes from the good people at Kairos Journal. They do good work. May we in our time be ready to make such a stand against fascist tyranny. 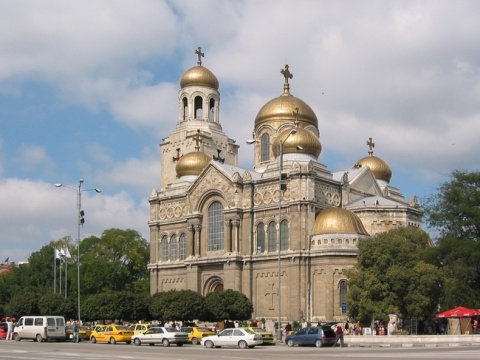 On May 24, 1943, Bulgaria celebrated one of its most important national holidays: Saints Kyril and Methodius Day. Unfortunately, there was a moral cancer at work in sectors of the government, for some officials were urging that all the nation’s Jews be deported to Poland. There they would face almost certain death in Nazi concentration camps. So Metropolitan Stefan, head of the Bulgarian Orthodox Church, addressed the issue bluntly. When he rose to deliver the traditional sermon to the masses assembled in Sofia’s Saint Alexander Nevski Square, he took aim at the Nazis: “This year our celebration is flawed by the persecution undertaken against the Jews … I send from this high place an appeal to the state authorities to not enslave the freedom-loving, democratic and friendly Bulgarian spirit … to foreign indoctrination, influences, and orders.”1 As he spoke, Nazi-sympathizing government ministers were seated behind him on the platform.2

The danger to Bulgaria’s Jews began several years earlier when the nation became a passive ally of the Germans. As part of that alliance, the nation passed anti-Jewish laws in 1941 and subsequently gave a pro-Nazi cabinet authority to exercise broad powers without parliamentary approval.3 Taking full advantage of the situation, several of the most anti-Semitic government officials vowed to Hitler that they would deport thousands of Bulgarian Jews for extermination.4Indeed, they tried to begin it on several occasions, but timely resistance from the king, key government officials, the public, and the Church thwarted their plan.5 And, so, the “entire Jewish population of the country” was saved.6 Not one person was ever deported, and Bulgaria’s Jews were the only Jewish community in the Nazi sphere of influence whose population increased during World War II.7

The Church had been active in the cause since 1940, when the parliament began to consider anti-Jewish laws under the ruse of protecting the country from harm. In response, the Holy Synod, the Bulgarian Orthodox Church’s supreme body, wrote to the prime minister in protest: “All men and all peoples must defend their rights and protect themselves from danger, but this just aspiration must not serve as a pretext for injustice and violence toward others.”8 Three years later, in March 1943, authorities attempted to corral Bulgaria’s Jews for the first time. Yet once again, the Church protested. In Plovdiv, the nation’s second largest city, the head of the local church, Metropolitan Kyril, threatened to lie across the tracks if a train loaded with Jews tried to leave the city. He also told the local government that he would act according to his conscience rather than their policies.9 Likewise, Neofit of Vidin, president of the Holy Synod, staunchly opposed anti-Jewish measures. After deportations from nearby Thrace and Macedonia, he met with the prime minister and strongly urged him “to show mercy and humanity toward the suffering Jewish minority.”10

Perhaps the boldest acts of resistance came from Metropolitan Stefan. A man of considerable political power, he preached against anti-Semitism in 194211 and later christened Jews in an attempt to have their names removed from the deportation list.12 Once, he defied a government order to close all the nation’s churches so that their priests could not reveal a secret deportation plot.13 Despite threats of arrest and public defamation, he never backed down from using the Church’s full resources to protect Jews.14

One historian aptly remarked, “There is no doubt that in the entire history of the Holocaust, the Bulgarian church stood high above any other Pravoslav [Orthodox], Protestant, or Catholic church, in her bold and unyielding struggle to rescue the Jews.”15 Indeed, it demonstrated that when God’s people stood for justice, they could accomplish feats with moral force that many nations failed to accomplish even by military resistance.

3 thoughts on “Some History I Didn’t Know”