Thursday is for Discussion 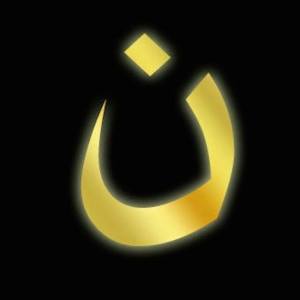 You have seen it on Facebook and twitter and instagram, in news reports and magazines. It is the Arabic symbol for the letter “N” and is used by ISIS to mark the homes of Christians (and to slate them for persecution). It is ISIS’s way of sealing the fate of the residents, of marking them for scorn and ridicule and giving license for others to confiscate property and to do whatever else they want to do with the occupants of the home. If that includes rape, stealing and selling occupants as slaves, forcing them into marriage with moslem men, torture, murder, it is all okay under the Sharia “Law” (sic) that ISIS proclaims. If you are a follower of the Nazarene you deserve whatever ISIS and its supporters want to dish out. Even the options that are offered to followers of Christ are a sham. ISIS says that if your house is marked or branded with the Arabic “N” you have three options, convert, pay a tax, or die.

But reports have proven that even this “mercy” (sic) is a public relations piece to placate Western journalists. Over and over again, even those who pay the tax (extremely high) are continually hounded and in many cases have been spared nothing. Only a delay has occured in their inevitable persecution. Reports from ISIS controlled areas in the Middle East and Africa are numerous where after having paid, houses of Christians have still been ransaked, burned, or destroyed and the Christians have still been raped, sold into slavery, and killed. ISIS marks Christians and lies about what it means. God marks Christians and promises wonder and glory for those who are faithful.

“In Him, you also, after listening to the message of truth, the gospel of your salvation—having also believed, you were sealed in Him with the Holy Spirit of promise, who is given as a pledge of our inheritance, with a view to the redemption of God’s own possession, to the praise of His glory.”   (Ephesians 1:13-14)

“Do not grieve the Holy Spirit of God, by whom you were sealed for the day of redemption.”  (Ephesians 4:30)

Which is why the apostle Paul says in 1 Corinthians 15:58

“Therefore, my beloved brethren, be steadfast, immovable always abounding in the work of the Lord, knowing that your toil is not in vain in the Lord.”

2 thoughts on “Branded by ISIS or Christ?”