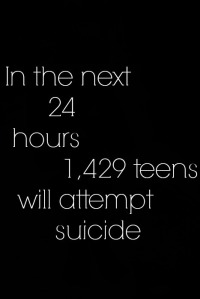 Think of it from another angle.

Add up all the people who die around the world from war. The war in Syria, the war in Ukraine, the various wars on the continent of Africa and in the Middle East–more people take their own lives, people between the age of 15 and 44, young people, than die from war!

Think of the heartache, the loss of promise and talent, the pain of those left behind. Think of the sense of hopelessness, darkness and despair that causes a person to think of death as more tolerable than life. Our world needs the gospel. It is desperately in need of Jesus.

It is our job to give the world the hope of the gospel.

Who will tell them if it isn’t us?

Again, it is our job to give the world the hope of the gospel.

Who will tell them if it isn’t us?