Last week a friend of mine posted a simple question on Facebook:

“What is the first question you want to ask Jesus in heaven?”

I don’t know what happened in other people’s mind and heart with that question but I can tell you that my response was instantaneous, “Why did you save a wretch like me?”

Maybe it was because after 40 years of walking with Jesus and reading the Bible, I can appreciate with greater depth how much I need a Savior, how much I needed and need to be rescued every day. Maybe it’s because this week I have been studying and meditating on Luke 5:1-11 and the calling of Peter. Maybe it’s because I can identify with Peter recognizing the holiness of Christ and instantaneously feeling his unworthiness saying

Whatever the reason, that’s my question. “Why me? Why did you save a wretch like me?”

I am in awe of Jesus and the gospel and the doctrine of justification by grace through faith.

Which is why this quote from John Murray was a powerful reminder of that grace when I read it over at Reformed Bibliophile this morning. Don’t let Murray’s dour looking puss scare you off!

Faith Without Works is Dead 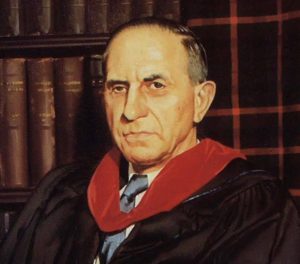 Faith stands in antithesis to works; there can be no amalgam of these two (cf. Gal. 5:4). That we are justified by faith is what engenders hope in a convicted sinner’s heart. He knows he has nothing to offer. And this truth assures him that he needs nothing to offer, yea, it assures him that it is an abomination to God to presume to offer. We are justified by faith and therefore simply by entrustment of ourselves, in all our dismal hopelessness, to the Saviour whose righteousness is undefiled and undefilable. Justification by faith alone lies at the heart of the gospel and it is the article that makes the lame man leap as an hart and the tongue of the dumb sing. Justification is that by which grace reigns through righteousness unto eternal life; it is for the believer alone and it is for the believer by faith alone. It is the righteousness of God from faith to faith (Rom. 1:17; cf. 3:22).

It is an old and time-worn objection that this doctrine ministers to licence and looseness. Only those who know not the power of the gospel will plead such misconception. Justification is by faith alone, but not by a faith that is alone. Justification is not all that is embraced in the gospel of redeeming grace. Christ is a complete Saviour and it is not justification alone that the believing sinner possesses in him. And faith is not the only response in the heart of him who has entrusted himself to Christ for salvation. Faith alone justifies but a justified person with faith alone would be a monstrosity which never exists in the kingdom of grace. Faith works itself out through love (cf. Gal. 5:6). And faith without works is dead (cf. James 2:17-20). It is living faith that justifies and living faith unites to Christ both in the virtue of his death and in the power of his resurrection. No one has entrusted himself to Christ for deliverance from the guilt of sin who has not also entrusted himself to him for deliverance from the power of sin. “What shall we say then? Shall we continue in sin, that grace may abound? God forbid. How shall we, that are dead to sin, live any longer therein?” (Rom. 6:1, 2).

It’s been about 30 years since I read Murray’s great book. Maybe it is time to dust it off and read it again.

2 thoughts on “A friend asked: “What is the first question you want to ask Jesus in heaven?””