Another offering from Kairos Journal. Usually, when I post an article from Kairos journal I add a post-script or question to stimulate thought and discussion. Instead of waiting til the end with a question, let me give it here.

“Are we better off now that such men, with such standards, are being systematically driven from the field of business?” 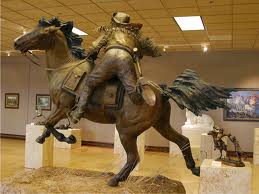 As Mark Twain remembered in his account of a stagecoach trip through the West,

Here he comes! Every neck is stretched further, and every eye strained wider. Away across the endless dead level of the prairie a black speck appears against the sky and it is plain that it moves. Well, I should think so. In a second or two it becomes a horse and rider, rising and falling, rising and falling—weaving towards us, nearer and nearer—growing more and more distinct, more and more sharply defined—nearer and still nearer, and the flutter of the hoofs come faintly to the ear—another instant, a whoop and a hurrah from our upper deck, a wave of the rider’s hand, but not reply, a man and a horse burst past our excited faces, and go winging away like a belated fragment of a storm.1

It was a Pony Express rider, one of over 200 who carried mail on the 2,000-mile route between St. Joseph, Missouri, and Sacramento, California—men with names like Lafayette Bolwinkle and G. G. Sangiovanni, and with nicknames like “Irish Tom” and “Pony Bob.”2 Though it ran for little more than a year (trumped by the telegraph, which could deliver a message in seconds rather than days), it became a treasured item of American lore.

Less well known is the religious devotion of a partner in the parent firm—Alexander Majors—and his efforts to instill a high moral standard in his company.3 Consider the riders’ oath:

I . . . do hereby swear, before the Great and Living God, that during my engagement, and while an employee of Russell, Majors and Waddell, I will, under no circumstances, use profane language, that I will drink no intoxicating liquors, that I will not quarrel or fight with any other employee of the firm, and that in every respect I will conduct myself honestly, be faithful to my duties, and so direct all my acts as to win the confidence of my employers, so help me God.4

Furthermore, each rider and each way station was issued a special, calf-bound5 edition of the Bible, supplied by the American Bible Society.6 Of course, riders were known to “backslide” from the pledge, the Bible was not typically at the forefront of their reading list, and enforcement was difficult in the sparsely populated wilderness,7 but Majors gave it his best, and it helped.

Prior to the Pony Express, Majors was a successful “freighter” in the West, with 100 wagons, 1,200 oxen, and 120 employees. Each worker had to pledge he would “treat animals in his care with kindness, use no profanity, stay sober at all times, and behave like a gentleman while in his employ.” Majors “rested his oxen and men from Saturday afternoon to Monday morning, and held worship services for his men on Sunday.”8 He noted, “When they saw I was willing to pay them the same price as that paid for work including the Sabbath day, and let them rest on that day, it made them feel I was consistent in requiring them to conduct themselves as gentlemen.”9

“Buffalo Bill” Cody, himself a rider, featured Pony Express reenactments in his “Wild West” show. Praising his former employer, Cody reported, “Every man, from wagon-boss and teamster down to rustler and messenger-boy, seemed anxious to gain the good will of Alexander Majors and to hold it, and to-day he has fewer foes than anyone I know.”10

Of course, these quaint pledges and practices would run afoul of lawyers and stockholders today, but there are new enforced pieties in the land, legal codes normalizing homosexuality and requiring funds for abortifacients. And biblically-sensitive companies such as Chick-Fil-A and Hobby Lobby (both of which, following Majors, honor the Lord’s Day) take a beating from the commissars of political correctness, whether the head of HHS or the mayor of Chicago. Majors may have made it tough for ruffians to get a job in his company, but now the government is making it tough for committed Christians to field a company in the first place.

3  “A Calvinist, Majors was a deeply religious man, a fundamentalist who read the Bible daily” [Christopher Corbett, Orphans Preferred: The Twisted Truth and Lasting Legend of the Pony Express (New York: Broadway Books, 2003), 22].