Continued from Yesterday
“What is a Christian: How Should He View Himself and His Mission? (part 3)

To be a sojourner, to be a fisher of men, is to understand the cross-shapedness of our calling. We must train our people to be driven by a vision of the cross. Believers in Christ who know, who have apprehended at a deep level that they are “cross-bought” and are to be “cross-shaped” in every area of their being, that they are to be sojourners not settlers—are malleable and useful to the Savior.

Again, the cross is to be the central pivot of our understanding of who we are, who we are becoming and the process whereby we become who we are.

Without this understanding we will always choose the familiar paths of least resistance, the paths that will not threaten our security, comfort, and convenience. Those paths will always lead to homogeneity and tribalism. Without this understanding, we find ourselves relating only to those who are “like us,” “who agree with us,” “who see the world the way we do.” We will find ourselves surrounded by religious people but not the mixed and motley group of people that resembles the crew that Jesus hung with.

The most important thing about me is NOT that I am a white, middle class, seminary educated, easterner, married, father of four kids, who now resides and pastors an Evangelical Free Church in Illinois. The most important thing about me is that I belong—body and soul, by virtue of Christ’s sacrifice of His life’s blood—to God. I have been bought by Him and now my life is shaped by His sacrifice.

I must not think of myself as a white male, with a middle class upbringing of German / Irish ancestry who has a seminary education, blah, blah, blah . . . The most precious, life absorbing truth about me is that I belong to God by virtue of a brutal and bloody sacrifice that purchased my redemption from the slave market of sin on a hillside outside Jerusalem marked by its resemblance to a skull.

This is true about my whole congregation.  We must learn to identify who we are not by the categories of our past but by the radical nature of the new family of which we are members. The most important thing about you is not that you are . . . 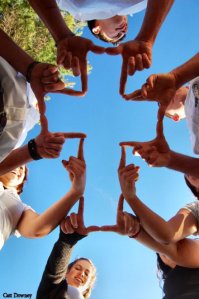 The most important thing about us is this: If you are a Christian, you are a Christ-one, bought by His blood, shaped by His sacrifice and committed to daily taking up your cross, (Mark 8:34) denying yourself (the old categories, the old values, the old things that you used to hold dear) and living now under the new realities of being His. You now live for His values, not yours. You now live for His purposes, not yours. You now delight in His agenda, not yours. And if He calls you to lay your life down, or your comfort, or your security, then you will delight to lay them down so that you may have empty hands to do whatever He asks of you. That is who we are. That is who we are becoming. And that is how we become who we are. We daily pick up our cross, deny ourselves and follow Him. [1]

There will be friction and trouble living the way of a sojourner. There are many settlers in the church. American churches in particular are dominated by settlers, especially and sadly in our oldest congregations and in our newest and largest churches. But Jesus made it very clear. Listen to these ominous words from the mouth of Christ:

Or these, even more sobering words:

Revelation 3:15-19
‘I know your deeds, that you are neither cold nor hot; I wish that you were cold or hot.  ‘So because you are lukewarm, and neither hot nor cold, I will spit you out of My mouth.  ‘Because you say, “I am rich, and have become wealthy, and have need of nothing,” and you do not know that you are wretched and miserable and poor and blind and naked, I advise you to buy from Me gold refined by fire so that you may become rich, and white garments so that you may clothe yourself, and that the shame of your nakedness will not be revealed; and eye salve to anoint your eyes so that you may see.  ‘Those whom I love, I reprove and discipline; therefore be zealous and repent.

[1] Some years ago, I wrote a personal “creed” to express some of these truths. Perhaps it is more than personal. Perhaps it could function as a “Sojourner’s Creed.” See the link here.

Tomorrow: Part 4 —> The Difference the Sojourner’s Life-style Makes on the Others

We Could Use Such a Leader Today

Obedience and a Loving Heart

Not What My Hands Have Done