Thursday is for Discipleship (usually)

Let me understate it.

The universe is vast.

The Hubble telescope and the opportunities aboard the International Space Station have given us significant new vantage points from which to probe the mysteries, beauties, and complexities of the universe.

I awoke this morning with the stunning thought (for me at least): “Compared to the utter bigness of the creation, the incarnation of Christ, the enfleshment of the creator and sustainer of all that is, seen and unseen, is both an uproariously funny and perfect example of an intensely localized ministry (see here and here and here) on the part of the God of the universe!”

Of all the places to personally visit in the vast universe of his creation, it is here, that the infinite God, dwelling in finite flesh (there’s a grey-matter bending thought), spent all of his time in a region of the planet a little larger than the state of Rhode Island.

From that small, localized, seemingly insignificant environ, YHWH would seek the rescue, repair, and redemption of his fallen creation. So radical and all-encompassing would be his localized expression of love and mercy, so powerful would be his news that the whole universe (“a new heaven and a new earth”) would one day be utterly transformed. Stunning. 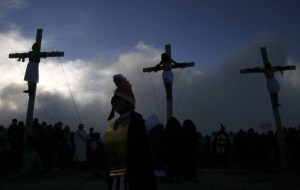 And it is the same type of ministry to which we are called. We who bear the Name are called to be intensely local in focus, loving our friends, our neighbors. He calls us to love the ones whose boundaries he has set (Acts 17:26) and placed around us. He gives us the task of lving them and loving him in such a way that our lives become magnetically attractive, drawing them to him.  We are a cross-bought people. We are to be a cross-shaped people, showing mercy, preaching the gospel, and living for the will of God rather than our own whims.

Lift him up. He will draw men to himself.

Where are the Shepherds?

Are You a Gentile?