Monday is for Discipleship

Here’s my take on why the substitution of the term “spiritual formation” for “discipleship” is not an improvement and actually exacerbates a problem the Church in America already had with the term discipleship. 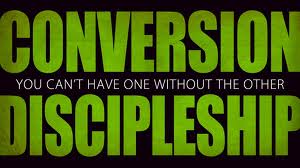 For some, the answer would be more or less articulate, more or less detailed, more or less eloquent, but at the end of the discussion, whatever anyone preferred to use would function pretty much as a synonym for that italicized sentence.

Here are my first five reasons why neither discipleship (as popularly understood) nor spiritual formation (as a more recent formulation of the task of discipleship) is not an improvement.

I’ve opened up a hornet’s nest here, but it must be done. If we do “spiritual formation” divorced from equipping for, exhorting to, and holding one another accountable to be witnessing, testimony giving, heralds of the gospel, we will bastardize the process and develop warped, selfish, spiritual snobs. We will not develop the disciples that Jesus had in mind when he told disciples to go into all the world and make disciples who enter into a life long process of learning to obey everything that he commanded. We will instead develop sterile and silent admirers of Jesus with little impact for the advancement of the Kingdom of priests for whom our Lord died and rose to redeem.