[Listen to the sound file while you read — two inches to the right of this line on this page, marked “Aubre’s Gift”]

The Savior is crowned with thorns.

Jesus is flogged and crowned.

The soldiers of the governor took Jesus into the governor’s headquarters inside the palace, and they gathered the whole battalion before Him. And they stripped Him and put a scarlet robe on Him, and twisting together a crown of thorns, they put it on His head and put a reed in His right hand. And kneeling before Him, they saluted and mocked Him, saying,

Pilate went out again and said to crowd,

“See, I am bringing him out to you that you may know that I find no guilt in him.”

So Jesus came out, wearing the crown of thorns and the purple robe. Pilate said to them,

And they spit on Him and took the reed and struck Him on the head. And when they had mocked Him, they took the purple robe and put His own clothes on Him and led Him away to crucify Him.

When the chief priests and the officers saw Him, they cried out,

Pilate said to them,

“Take him yourselves and crucify him, for I find no guilt in him.”

The Jews answered him,

“We have a law, and according to that law he ought to die because he has made himself the Son of God.”

That’s who stands before them.

The God of Abraham and Sarah, Isaac and Rebecca, and Jacob and Rachel, the God of Miriam and Moses, Joshua and Samson, the God of Hannah and Samuel, David and Solomon, the God of Esther, Hezekiah and Nehemiah, the God of Isaiah, Jeremiah and Ezekiel stands before a mob bent on crucifying Him. With a word, He could destroy their power and disintegrate their bodies. 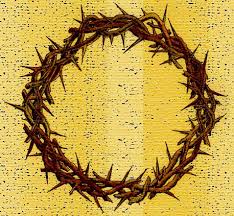 But He does not.

Instead, He allows them to beat Him, to flog Him, to mock Him, to crown Him with brutal scalp-piercing thorns.

Allow your heart to marvel at the restraint your Lord showed. He who possessed all power allows all the injustice of the moment to fall on Him.

Because, He came to demonstrate His love, in that while we were yet sinners, He—the anointed fulfillment of Scripture, the Savior of the world—laid His life down for us (Roman 5:8).

You are one of the many, if you believe on His name. Is that not news worthy of both tears and rejoicing?

“Ransomed Sacrifice for my sin, thank You for the meekness of  Your stand that day. You kept power under control so that I could be ransomed from the death I deserved. Help me to live in such a way that others never view Your life as a museum exhibition, but rather as a love letter written in the blood of Your sacrifice. In Your matchless name, Amen.

“An excerpt from Experience the Passion of Christ by Marty Schoenleber, Jr.