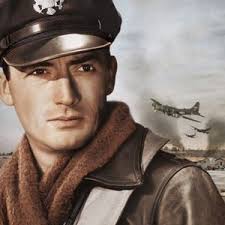 Over Memorial Day back in May, I watched the 1950 movie, “12 O’Clock High” starring Gregory Peck. It was a movie released before I was born but shaped in many ways the generation I grew up in through the TV spin-off by the same name with Robert Lansing reprising the role of Frank Savage and aired between 1964 and 1967.

Our family, like many families, didn’t have a TV until I was about 7 or 8 years old, which means that for a whole generation born in the 50’s TV and the stories it brought us were all new and fascinating in a way that succeeding generations can’t even imagine. There were only three stations, ABC, NBC, and CBS and later on a few grainy UHF stations with mostly local and lower production value programs. Westerns and War Movies dominated the tube with a few variety shows like “I Love Lucy” and “Jackie Gleason” already in syndication.

I love history and so these old movies always start me down a research path about the movie, the story behind the movie and the times depicted. And that is how I started to watch some of the old first season episodes of the Television series. It has been fascinating and instructive as well as sobering about the brutalities of war and the conflicted-courage of the men who fought World War II.

“‘What is the casualty projection?’ The General turns and surveys the room, filled with men having drinks and singing a song, “Deep in the Heart of Texas”. He looks at young men in the pride and confidence of their youth. He looks at men he has come to love and respect and from whom he asks for unthinkable bravery and says, ‘By 11:00 hours tomorrow, 1 out of 3 men in this room will be dead.”

How do you make such decisions? How do you sleep at night after having looked in their faces and knowing you will grieve for the rest of your life about them and for their families? How do we live in a world that has to make such decisions where the sons of men and women whose love created those very sons are dispatched to graves by strangers?

There is much to learn from watching old films but perhaps the first thing we should learn from movies like this is thankfulness. Thankfulness that there are survivors of such failures to cherish life. And there is a God who one day—O Lord let it come soon—when all wrongs will be righted, all injustices made right, all sorrows ended and all tears wiped away.

“Oh God, help us live lives that reflect the value of your Kingdom. Make us a people who delight in shaping our lives by the Cross. You bought us through the blood of the Cross. Help us to never forget that and to offer our lives for those around like you offered your life for us. Our neighbors need You. Help us to live sacrifically for them. For the glory of your name. Amen.”

Why I Am and Am Not Writing About Riots and Injustice

Evil Responses to Evil Action are Not Transformed into Righteousness.

What Would It Mean to Hear You?