[ An offering from Kairos Journal ] 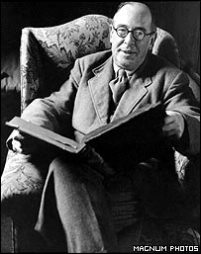 Many people are atheists because they believe that evil and suffering in the world proves that God does not exist. Looking back on his own intellectual and spiritual journey from atheism to Christian belief, however, C. S. Lewis argued quite the opposite. Whilst the suffering he experienced in his youth (the death of his mother, unhappy schooldays, and the traumas of service in the First World War) destroyed the simple faith of his childhood, he eventually came to realize that atheism is a superficial and inconsistent response to the problem of evil. For how, he argued, can anyone explain the presence within them of that very moral standard which alone enables them to complain about the existence of evil and use it as an argument against God? Where does this moral standard come from? Moreover, if there is no God and human beings are only accidental by-products of a random and purposeless universe, how can atheists attach any significance to their thoughts and values? These points were summarized most effectively for a popular audience in this extract from one of C. S. Lewis’s famous BBC radio broadcasts during World War II.

My argument against God was that the universe seemed so cruel and unjust. But how had I got this idea of just and unjust? A man does not call a line crooked unless he has some idea of a straight line. What was I comparing the universe with when I called it unjust? If the whole show was bad and senseless from A to Z, so to speak, why did I, who was supposed to be part of the show, find myself in such violent reaction against it? A man feels wet when he falls into water, because man is not a water animal: a fish would not feel wet. Of course, I could have given up my idea of justice by saying it was nothing but a private idea of my own. But if I did that, then my argument against God collapsed too – for the argument depended on saying that the world was really unjust, not simply that it did not happen to please my fancies. Thus in the very act of trying to prove that God did not exist – in other words, that the whole of reality was senseless – I found I was forced to assume that one part of reality – namely my idea of justice – was full of sense. Consequently, atheism turns out to be too simple. If the whole universe has no meaning, we should never have found out that it has no meaning: just as, if there were no light in the universe and therefore no creatures with eyes, we should never know it was dark. Dark would be a word without meaning.1