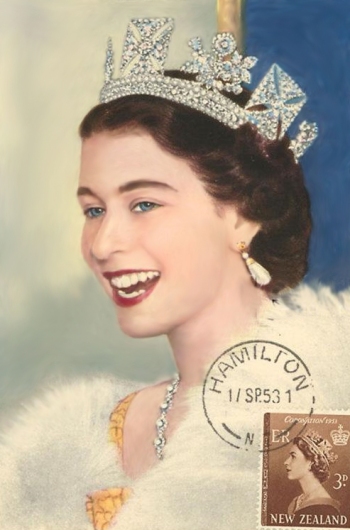 When a birthday comes along, or a royal wedding, or the Queen or one of the princes is making an appearance, or a royal something or other happens, the news is abuzz and the crowds appear, and smiles are glowing all around. The Brits have a lot of warm-fuzzy feelings about the Queen.

This is all despite the fact that the Queen is merely the ceremonial head of government. She has no real power.  She has no real authority. But she does, without a doubt, make a majority of her subjects feel good when they think about her.

And why shouldn’t they?

She was lovely when she became Queen in 1953 and she is lovely today at the age of 91. Each year she does those marvelous (and short) Christmas greetings from the Palace and she is really quite remarkable and dignified. She is admired and loved at some level by most Brits. She seems gentle and kind and really, who wouldn’t want to have a chat and a cup of tea with her? I would.

I was reflecting on all of this on my way to a discipleship appointment. I and another young man were going to study a number of Scriptures related to the Church. And I hit upon a question that I thought would be appropriate. (Side issue: I love it when you ask a question that gets people to actually think and delivers to them as they think, the exact answer you want them to get.) We were looking up Scripture on the makeup of the Church, three of them in Colossians that describe Jesus, as the “head of the Church, his body” (Cf. Col. 1:18, 2:10, 19, see also Eph. 1:22, 4:15, 5:23).

Time for my question.

Over coffee at MacDonalds, with our Bibles open, I asked, …

“Can you think of any examples in real life where, the head of a company, or department, or government has no real power?

It took all of two seconds to come up with the answer I wanted to hear.

“The Queen of England.”

“Doesn’t that sound almost completely like how most people in most churches treat Christ, the head of the church? They like him. They admire him. They come out for his birthday celebrations (Christmas) and big events in his life (Good Friday and Easter), many will show up semi-regularly at his weekly gatherings but practically, he has no power, no authority in their lives. They don’t pay attention to his word. They don’t sit and talk with him, even though he is far more accessible than the Queen of England.”

Practically, it seems that most professing Christians are just that, professing. Christians at the lips but, seemingly, unbaptized in any other significant area of their lives.

But our King, our monarch, unlike the Queen of England, has real power and authority. He expects to be obeyed. He expects his word to honored. He desires that we live passionately for and like him and so, represent him in the world as His ambassadors.

When do you think the King wants us to start living like he really is our LORD and Savior?

2 thoughts on “The Brits Love Their Queen”