Monday is for Discussion

I have long been mesmerized by the play since my days of teaching the Life of David at the Institute of Biblical Studies and the International School of Theology. It was during my study of David’s life that I entertained the idea of leaving the ministry to work on a Ph.D. in English Literature. It was a pipe dream and I would have been a terrible academic, but the play captured my attention because the guilt-ridden King (the murderous uncle of Hamlet) seemed to have much in common with the King Saul, David’s predecessor.

In Act 3, Scene 3, the play reaches the crux of the whole play. The king is in the chapel and his monologue reveals the tension of his heart.

O, my offence is rank, it smells to heaven;
It hath the primal eldest curse upon’t,
A brother’s murder. Pray can I not,
Though inclination be as sharp as will:
My stronger guilt defeats my strong intent;
And, like a man to double business bound,
I stand in pause where I shall first begin,
And both neglect. What if this cursed hand
Were thicker than itself with brother’s blood,
Is there not rain enough in the sweet heavens
To wash it white as snow? Whereto serves mercy
But to confront the visage of offence?
And what’s in prayer but this two-fold force,
Or pardon’d being down? Then I’ll look up;
My fault is past. But, O what form of prayer
Can serve my turn? “Forgive me my foul murder”?
That cannot be; since I am still possess’d
Of those effects for which I did the murder,
My crown, mine own ambition and my queen.
May one be pardon’d and retain the offence?
.                                                    Act 3 Scene 3, Line 36-56

A few lines later the guilty king makes his attempt at prayer and confession of his sin with these words to alert the audience of his intentions:

It’s a plea to his own heart to be soft and truly repentant for his ambition and lust that led to murder and adultery. And while he is on his knees engaged in his silent prayer, Hamlet enters and considers ending his uncle’s life for his treachery toward his father but in the end leaves the scene as the king rises from his attempted confession. His words tell the product of his prayer. 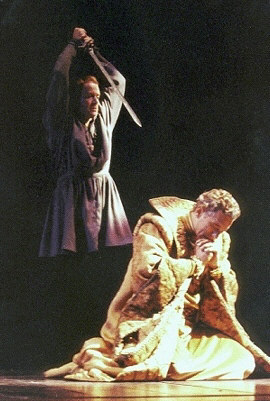 It is a scene that plays out the corruptions of king’s heart. He wants forgiveness but he knows that forgiveness requires repentance and he is unwilling to truly repent. He wants a cheap grace that receives the blessing of God without the necessity of true repentance.

And that is our struggle every day.

Will we bow our “stubborn knees” which is really only a metaphor for our stubborn hearts? Hamlet’s uncle wanted a soften heart, an innocent heart like a new-born babe, but he didn’t want the process. He wanted his sin and the acquisitions of his sin more than he wanted forgiveness. Exactly our struggle. And in contrast to the king of Shakespeare’s play, exactly the process we must pursue.

Oh God, make my heart and the heart of every Christian soft and supple to Your Spirit. Give us true repentance to confess and forsake our sins.  Help me, help us, “lay aside every weight, and sin which clings so closely, and let us run with endurance the race that is set before us, looking to Jesus, the founder and perfecter of our faith, who for the joy that was set before him endured the cross, despising the shame, and is seated at the right hand of the throne of God.” (Hebrews 12:1-2 ESV). Break me that you might heal me. For the glory of Christ I ask it. Amen.

Discipleship: Not for the Half-hearted

The Gospel, Not the Preacher, is Powerful

Can I Brag a Bit?