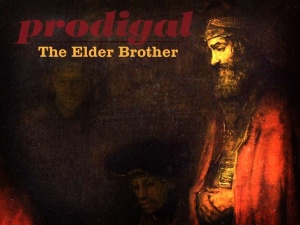 This morning I preached the third message from Luke 15. The so-called “Parable of the Prodigal Son” is perhaps the best know and the worst titled parable of all of Jesus’ masterpieces. Some have called it the greatest short story ever told. Jesus is hunting hearts.

Unfortunately, both the naming of the parable and the predominant focus when it is taught leads us away from the point that Jesus was primarily aiming at.

The parable was told for a particular audience. Verses 1-2 tell us that the Pharisees and the Scribes were upset with the rabble that was drawing near to Jesus. They felt the tax collectors and sinners that Jesus was eating with were unclean and unworthy of an audience with Jesus. Verse 3 is short but is the key to interpreting the entire parable, “So, he told them this parable.”

Here’s the outline of the last three weeks:

The Pharisees and Scribes are the targets for the parable (vss. 1-3). Who were they? One way of thinking of them is that they were the most Bible literate, Bible-quoting, Bible doing, Bible-honoring, people of the first century. Who would fit that description today? Wouldn’t it be we evangelicals?

As a group, is there anyone who takes the Bible more seriously, quotes it more, or honors it more than us? This parable is targeting us. It is an arrow designed to get past our defenses. It is Jesus warning us to delight in the return of sinners to Him. It is Jesus inviting us to abandon “older brother” arrogance, hardness of heart, intolerance, and self-righteousness and join the celebration party that is happening “before the angels of heaven.”

Why does Jesus want this for the “older brothers” that we sometimes become?

You see, Jesus is hunting our hearts.

Let’s wake up tomorrow and ask God to help us come to ourselves (vs. 17). Let’s ask Him to give us the heart of the prodigal so that we can avoid becoming the self-righteous older brother.

One thought on “Jesus is Hunting Hearts”

Life Together (Bonhoeffer’s Meditations on Community)