Tuesday is for Meditation 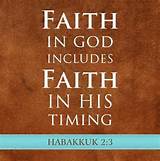 Reading the life of George Müller, I always thought he must have had the gift of faith. His reliance on God is legendary and the stories that come out of his prayers and the life that he led have inspired Christians and non-Christians alike for 150 years. But a recent article by John Piper explores what the famous prayer warrior actually believed about his faith. Here’s an excerpt from Piper’s article (in blue below).

George Müller (1805–1898) provided for thousands of orphans by means of the “faith principle” — which meant he would look to God and never directly ask another person for money. Nor did he ever borrow money — for anything. He was renown for peaceful trust in God’s provision, even when a deadline loomed and food was short.

On this faith principle, he raised £110,000 to build five orphan houses that accommodated 2,050 orphans. In his lifetime he cared for 10,024 orphans. By his example, he inspired others to embrace orphan care, including Charles Spurgeon, who said, “The God who answers by orphanages, let him be Lord!”

It Was Not the Gift of Faith

Nevertheless, Müller was adamant that he did not have the gift of faith. What did he mean, and why should we be thankful?

Think not, dear reader, that I have the gift of faith, that is, that gift of which we read in 1 Cor. xii. 9, and which is mentioned along with “the gifts of healing,” “the working of miracles,” “prophecy,” and that on that account I am able to trust in the Lord.

He emphasized this point because he meant for the world to see that God keeps the promises of Scripture for those who trust him. [bold emphasis added] If he had a special gift of faith that God does not expect all to have, then one of Müller’s great aims would have been thwarted. He believed he was setting a biblical example for all of us:

All believers are called upon, in the simple confidence of faith, to cast all their burdens upon Him, to trust in him for everything, and not only to make every thing a subject of prayer, but to expect answers to their petitions which they have asked according to His will, and in the name of the Lord Jesus. (302)

The whole article is worth reading and you can link to it HERE.

Think about that last paragraph from Müller, especially the phrase, “to expect answers to their petitions which they have asked according to His will, and in the name of the Lord Jesus.”

And here’s a suggestion for how to begin to learn what brother Müller has to teach us.

2 thoughts on “George Müller Did Not Have the Gift of Faith! What?”

Uvalde, Texas and the Prophet Habakkuk

Is Prayer Worth It?

God is Greater Than Our Hearts

Your God Watches Over You