Yesterday, I posted (read it here) the first part of an excerpt from Dorothy Day’s essay on Luke 2:7. Here is part 2 of the very convicting and challenging meditation on the what it means to serve Christ in the world today. I have added a few links to give some information on some of the more obscure references.

It is not likely that I shall be vouchsafed the vision of Elizabeth of Hungary (Wiki bio here), who put the leper in her bed and later, going to tend him, saw  no longer the leper’s stricken face, but the face of Christ. The part of Peter Claver, (Peter Claver bio [1581-1654]) who gave a stricken negro his bed and slept on the floor at his side, is more 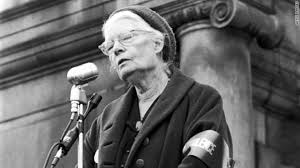 likely to be ours. For Peter Claver never saw anything with his bodily eyes except the exhausted black faces of Negroes; he had only faith in Christ’s own words that these people were Christ. And when on one occasion the Negroes he had induced to help him ran from the room, panic-stricken  before the disgusting sight of some sickness, he was astonished. “You mustn’t go,” he said, and you can still hear his surprise that anyone could forget such a truth: “You mustn’t leave him–it is Christ.”

It would be foolish to pretend that it is always easy to remember this. If everyone were holy and handsome, with alter Christus [another Christ] shining in neon lighting from them, it would be easy to see Christ in everyone. But he is disguised under every type of humanity that treads the earth.

To see how far one realizes this, it is a good thing to ask honestly what you would do, or have done, when a beggar asked at your house for food [or on the street corner]. Would you–or did you–give it on an old cracked plate, thinking that was good enough? Do you think that Martha and Mary thought that the old and chipped dish was good enough for their guest?

In Christ’s human life, there was always a few who made up for the neglect of the crowd. . . .

We can do it too, exactly as they did. We are not born too late. We do it by seeing Christ and serving Christ in friends and strangers, in everyone we come in contact with. For he said  that a glass of water given to a beggar was given to him. He made heaven hinge on the way we act toward him in his disguise of commonplace, frail, ordinary humanity.

And to those who say, aghast, that they never had a chance to do such a thing, that they lived two thousand years too late, he will say again what they had the chance of knowing all their lives, that if these things were done for the very least of his brethren they were done to him.

What is the “Narrow Way?”

“Intersectionality” and Its Threat to the Gospel