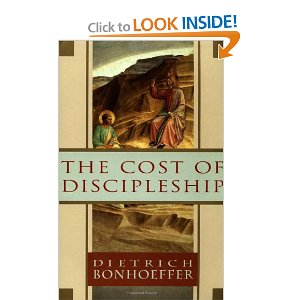 “Cheap grace is the deadly enemy of our Church. We are fighting today for costly grace.

Cheap grace means grace sold on the market like cheapjacks’ wares. The sacraments, the forgiveness of sins, and the consolations of religion are thrown away at cut prices.  . . . The essence of grace, we suppose, is that the account has been paid, everything can be had for nothing. . . .

Cheap grace means grace as a doctrine, a principle, a system. It means forgiveness of sins proclaimed as a general truth, the love of God taught as the Christian ‘conception’ of God. An intellectual assent to that idea is held to be of itself sufficient to secure remission of sins. . . .

[Cheap grace means that] Instead of following Christ, let the Christian enjoy the consolations of his grace! That is what we mean by cheap grace, the grace which amounts to the justification of sin without the justification of the repentant sinner who departs from sin and from whom sin departs. Cheap grace is not the kind of forgiveness of sin which frees us from the toils of sin. Cheap grace is the grace we bestow on ourselves.

Lord Jesus, purify Your Church. Make us lean hard into costly grace and to recognize cheap-grace thinking and living in our lives so that we can repent of it and run from it with every beat of our hearts. In Jesus’ name, Amen.

4 thoughts on “Bonhoeffer’s Cheap Grace: The Battle Still Needs to be Fought”