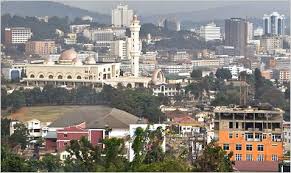 Homosexual activists will not be pleased with this posting. The following is a brief article from Kairos Journal documenting the murder and martyrdom of missionaries to Uganda that would not relent and participate in homosexual activity. Present day Christians in Uganda who resist the worldwide push for acceptance of homosexuality as an alternative lifestyle are not “homophobic” but faithful witnesses to the faith and example of those who brought the gospel to them.

Faithfulness to God is sometimes costly.

The faces of the hundred executioners were painted black and red. Dressed in animal skins and martial headdresses, they danced and sang, “Today the kinsfolk of these children will weep.” But the Christians, bound hand and foot and wrapped in bundles of reeds, calmly replied, “This is the place whence we shall go to see Jesus Christ. In one moment we shall see Him.”1 Wood was stacked upon them and lit; the flames rose in a circle as over a burning hut and quickly consumed them. Their offence: refusing to engage in sodomy with the king.

In 1878, missionaries left the coast for Buganda (present day Uganda), but departed in 1882, having suffered a disappointing reception under a hostile King. Still, the small church grew, especially among the pages in the court of the new king Mwanga. Encouraged, the missionaries returned in 1885, but this proved problematic since many Africans made no distinction between them and the colonial expansionists; their Christian converts suffered from guilt by association.

King Mwanga feared Christianity, believing it would bring the wrath of his ancestors upon his kingdom. Furthermore, these Christians refused to worship the traditional gods, and they objected to the monarch’s unspeakable practice of drafting his subjects as homosexual partners. To resist meant death, and resist they did.

On November 15, 1885, Joseph Mukasa, a leading courtier, became the first martyr. He had spoken out against the lifestyle of the king and tried to save his colleagues from the monarch’s grasp. Just before he was beheaded and his body burned, Mukasa addressed the executioner: “Tell [King] Mwanga this—I forgive him for killing me without cause, but he must change his life. Otherwise I shall speak against him at God’s tribunal.”2

More than 40 other Christians were martyred between May 25 and June 3, 1886. During their captivity, the eldest of the group encouraged everyone to remain courageous: “Do not be afraid, hold fast! We shall not die twice; our friends are already with our Lord, we shall soon be with them.”3 On the day of their death, they were joined by Mbaga Tuzinde, the seventeen-year-old son of the chief executioner. As a Christian, he ran to be with the others despite his kinfolks’ efforts to save his life.

Today, some Western Church leaders are pressuring African brothers to compromise their stance against homosexuality,4 but so far the Africans have stood fast. They know what the Bible teaches on the matter, and they refuse to depart from it. Furthermore, it would be betrayal of the martyrs who have gone before them, and this they cannot countenance.

6 thoughts on “Standing Up and Dying for What is Right”

I Want to be Known in Hell.