The apostle Paul is flinchless.

Reading the Bible is a dangerous activity. Every page has the capacity to turn a life inside out. Here I am taking a break from reading another book (Todd Miles’ excellent refutation of Pinnockian and McLarenian inclusivism, A God of Many Understandings? The Gospel and a Theology of Religion), so I pick up my Bible and read the 26th chapter of Acts and come across the 29th verse:

And Paul said, “Whether short or long, I would to God that not only you but also all who hear me this day might become such as I am—except for these chains.”

Paul is in the midst of his defense before Agrippa and Festus and is about to be sent on to Rome for his appeal. After defending and standing for the resurrection of Christ and proclaiming his gospel as “the light both for our people (the Jews) and to the Gentiles” Agrippa said to Paul, “In a short time would you persuade me to be a Christian?” (Acts 26:1-28, esp. v 28) And then Paul responds with the verse 29.

“I would to God that not only you but also all who hear me this day might become such as I am—except for these chains.”

A bit of humor to lighten the moment with that reference to his chains, but look at what he says. 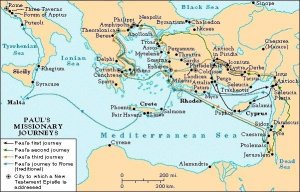 “I would to God that not only you but also all … might become such as I am.” Think about that for a moment. Paul is convinced that the gospel he preaches is for ALL peoples without distinction. This must have sounded every bit as shocking in the pluralistic culture of Rome as it does in ours. But Paul didn’t flinch. All people needed to believe what Paul preached.

He knew he had been sent to the Gentiles “to open their eyes, so that they may turn from darkness to light and from the power of Satan to God, that they may receive forgiveness of sins and a place among those who are sanctified by faith” in Christ. (Acts 26:18) Convinced that this is so, he invites ALL who he knows, the powerful and the lowly, to bow their knees at the foot of a cross that gazes at and beyond an empty tomb.

But Paul wants more than repentance and belief. He wants all to “become such as I am.”  What did he mean? Might he mean that he wants every believer, every receiver of the gospel to become a passionate proclaimer of the gospel, one willing to count all things as … well …, just go read Philippians 3:8-10 in your own Bible.

Like I said, the Bible is a dangerous book to read.