More for Wednesday Thoughts and Prayers

With the great advance of the gospel in the rest of the world through house churches, why is it that the American Church seems to be so slow to pick up on the trend? It is hard to find a more pragmatic people than citizens of the USA, so why haven’t we latched on to this “effective” strategy for propagating the gospel? 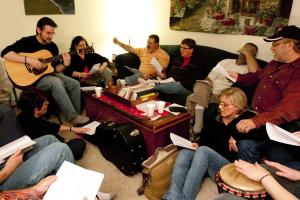 Ted Esler over at http://Esler.org has a great post on why Americans seem to have an aversion to house churches. Really a good and encouraging site. Ted is the the executive vice president of Pioneers USA, one of the fastest growing mission movements in the USA. In his post he mentions five reasons and discusses each in a short paragraph:

Go over and read what he has to say. Then come back and read my additional five reasons here. I say come back here because Ted hasn’t posted my comment yet and I have expanded on what I wrote over there in my comments below.

I think Ted Esler has some good and helpful thoughts here. But lets be more reflectively honest as well. Many of you know that I am working on the planting of a cluster of house churches in the Mundelein/Vernon Hills area of Northern Illinois.  [Update: since this post I have entrusted that work to others in order to accept a call to a rural multi-site church that is open to the concept of house churches.] So I am not an anti-house church guy. But I do think that if we are going to be honest there are other factors involved in why Americans seem to have an aversion to house churches as they are presently moving forward on the American landscape.

With what I have written, some may wonder why I am planting a cluster of house churches. But that, my friends, is another topic.

8 thoughts on “Why Does America Seem to Have a House Church Aversion?”

The Beatles Lonely People–a Lament for All of Us

Alister Begg on the Perfect Sufficiency of Christ