Over the past two weeks, I have watched my son-in-law’s copy of Band of Brothers. It is a fantastic production despite the obligatory HBO twenty second gratuitous sex scene and the true to reality language. 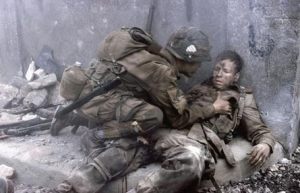 It gives an unblinking and authentic gaze at the cruelties and absurdities of war, as well as the nobility and foibles of men and women under extraordinary pressure, physical exhaustion, sleep deprivation, pain and fear. It is often not pretty. It is often saturated in pathos. And it is filled with lessons on leadership, good and bad. 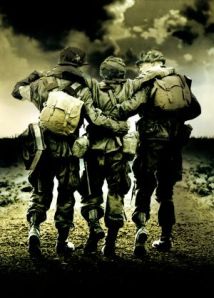 All of these and many others might seem trite when you read them off the page, but against the backdrop of the 10 episodes of the film adaptation of Stephen Ambrose’s account of “Easy Company” the 506th Parachute Infantry Regimen in World War II, they are unforgettable. If you watch Band of Brothers or if you have read the book by Ambrose, let me recommend another one.

Major Winters, whose story is told in both, wrote his own book, Beyond Band of Brothers:  The War Memoirs of Major Dick Winters. It is a good supplement to the movie and a great way to highlight the leadership lessons from the brave men who gave their lives to defeat Nazi Germany. Ladies, this would be a great Christmas present for the men in your life. There is a great scene fairly early in the episodes where Winters is talking to one of his junior officers who had made a bet with an enlisted man. “What if you had won?” Winters asked. Before the officer could answer, Winters continued, “Never put yourself in a position where you take from these men.”

A leader knows how to honor those who sacrifice for the cause.